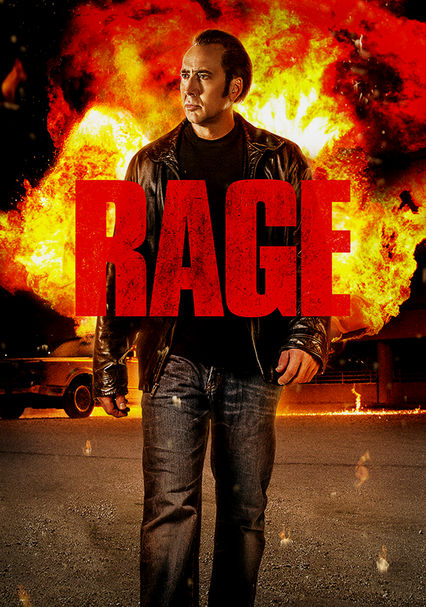 2014 NR 1h 38m DVD
Paul Maguire is a respectable businessman and loving father living a peaceful life, until his violent past comes back to haunt him. When his daughter is taken from their home, Paul rounds up his old crew to help him find her, by any means necessary.

Parents need to know that Rage is a revenge thriller starring Nicolas Cage. The violence, while frequent and often over-the-top, doesn't have much blood. But there's lots of fighting, punching, shooting, slashing and stabbing with knives, car chases, foot chases, and explosions. Viewers also see some scenes of torture (a man is hung by his wrists and punched with brass knuckles; a rope is tied to a girl's neck and a brick, and the brick is thrown out the window), and a teen is kidnapped and dies. A woman who's apparently high on drugs, is treated roughly in one scene. Many drugs are mentioned by name, and teens are shown drinking -- and playing with guns -- with dire results. Language includes one use of "f--k" and a few uses of "s--t," plus "d--k," "slut," and more. Sexual content includes some passionate kissing from a married couple, some innuendo, and scantily clad women dancing at a strip club.

In two scenes, a husband and wife kiss passionately and get excited, but they stop before having sex. Strong sexual innuendo. A scene takes place in a strip club, but no nudity is shown (though women do dance in skimpy outfits on stage).

Violence includes heavy but not realistic (or very bloody), fighting, punching, shooting, slicing, and stabbing with knives, chases on foot and in cars, and explosions. Teens are shown playing with guns, with dire results. In one scene, some thugs torment a girl to get information from her boyfriend. (They tie a rope around her neck, attach the rope to a brick, and toss the brick out the window.) A male character is tortured, tied up, and punched with brass knuckles. Characters die, including a teen.

The movie is about a criminal who's gone straight, but he isn't really rewarded for his efforts. Revenge is a major motivation. Characters who jump to conclusions are punished. Otherwise, viewers might be warned about leaving guns and/or alcohol around the house.

Teens are shown drinking and getting drunk at a small house party. A woman is shown to be high on some unknown drug and barely functional. Adult characters are briefly shown drinking socially. Mentions of meth, pot, and cocaine.