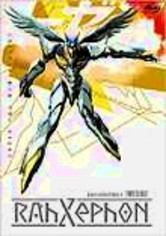 2001 NR 6 discs
The year is 2015, and most of the Earth's population has been wiped out in a brutal war. High schooler Ayato Kamina meets a girl who takes him to a secret sanctuary for the war's civilian survivors, where a humanoid mechanical weapon is discovered. The black egg from which the weapon hatches bears a mark similar to one Ayato has on his body. And, as it turns out, only the young teenager can pilot this new weapon.