Rain in the Mountains 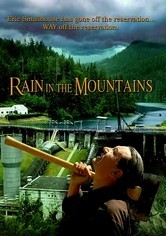 Rain in the Mountains

2006 NR 1h 30m DVD
Eric Smallhouse (Steve Pierre) doesn't know the first thing about the traditions and practices of his Native American ancestors, but he's not going to let that little detail dissuade him from leading his people to a resurgence of cultural pride. Renaming himself "Rain in the Mountains," Eric sets out to inspire his people to deny the influences of the white man's world in an effort to recapture their true identity.