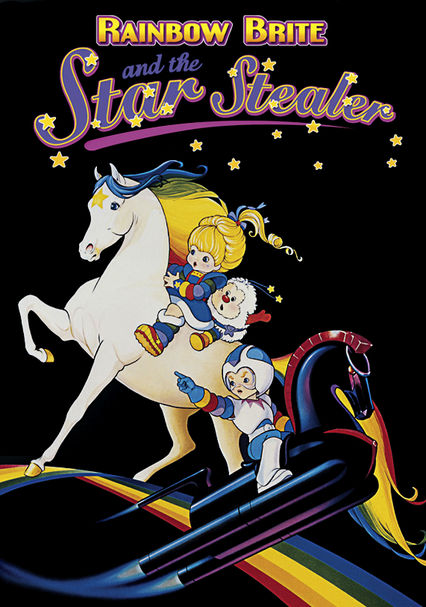 1985 G 1h 25m DVD
The dark princess is up to no good! She's snatched the Spectra -- the universe's sole source of light. Without Spectra in its rightful place, all will be plunged into gloom and dreariness unless Rainbow Brite and her friends can defeat the princess. In an animated cosmos of enchanted worlds, spunky Rainbow Brite and her magical horse, Starlite, confront evil by using color, magic, cleverness and joy as ammunition.

Parents need to know that this animated movie, originally released in 1985, was the only feature-length film in the Rainbow Brite product line. The brand sold greeting cards, books, toys, and clothing and made a TV series designed to appeal to little girls. Rainbow Brite herself is a cute, heroic protagonist with a beautiful white horse who lives in Rainbow Land and is charged with "saving the colors" of the universe. Although this may sound pastoral and gentle, the movie is far from that. It's an adventure with nonstop cartoon action, loud sound effects (the shooting is unrelenting), and a confusing array of villains: drooling and toothy ogres, a cackling wicked princess, sea serpents, menacing robots, and more. The heroes are either captured or are in grave danger many times, and the stakes are high: If Rainbow Brite and her friends are not successful in their quest, all life in the universe will be extinguished.¿

Extensive cartoon action: zapping, falling, crashing, capturing, imprisoning, blowing up. The heroes, especially the beautiful rainbow-trimmed white horse, are in peril throughout; they move from one "brink of disaster" to another. There are many lightning flashes, noisy explosions, daring rescues, and cartoon-scary villains (green ogres, robots, a wicked princess, soldiers, goblins, sea creatures).

Lots of name-calling as one villain continuously delivers insults to his assistant: "do-do brain," "chicken breath," "bubblehead," "amoeba brain," and many more.

Emphasizes teamwork. Opening song lyric: "Find a place to start the day in a useful way." Good triumphs over evil.

Made in 1985, this film was a marketing tool for a wide range of Rainbow Brite (Hallmark) products, including games, toys, dolls, clothing, and greeting cards. Though this is the only film associated with the brand, a Saturday morning television series was produced as well. Only a few new products are still available for this brand, but early Rainbow Brite merchandise still has an active secondary market. The post-1980s Rainbow Brite character was older, and products were aimed at tweens and teens.¿