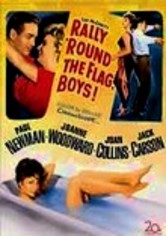 1958 NR 1h 46m DVD
Sleepy suburb Putnam's Landing has been earmarked for a new Army missile base, and Grace Bannerman (Joanne Woodward) won't stand for it. Meanwhile, her husband, (Paul Newman), who has his own problems fighting off the advances of a sexpot (Joan Collins), is fed up with Grace's protest movement. Tuesday Weld and Dwayne Hickman also star in director Leo McCarey's uproarious adaptation of the book by Max Shulman.