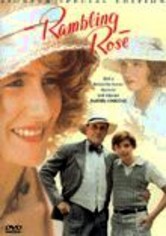 1991 R 1h 55m DVD
The Hillyers are a strong family growing up in the Depression-era South. But everything changes when Rose (Laura Dern) moves in to take care of the children. After the morally sound father (Robert Duvall) resists Rose's sexual advances, she shifts her efforts to young Buddy (Lukas Haas). Told from Buddy's point of view as a flashback, the film earned an Independent Spirit Award for Beast Feature and Oscar nominations for Dern and Diane Ladd.