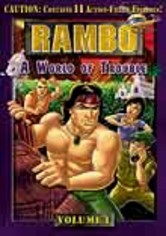 1986 NR 6 discs
Lock and load for this action-packed animated series based on the hit feature film Rambo (and its sequels). Every episode finds our hero in a "world of trouble" ... but remember, Rambo's a Congressional Medal of Honor winner and as resourceful as they come! Voice cast includes Neil Ross, Michael Ansara, James Avery, Michael Bell, Peter Cullen, Ed Gilbert, Dale Ishimoto, Robert Ito and Mona Marshall.