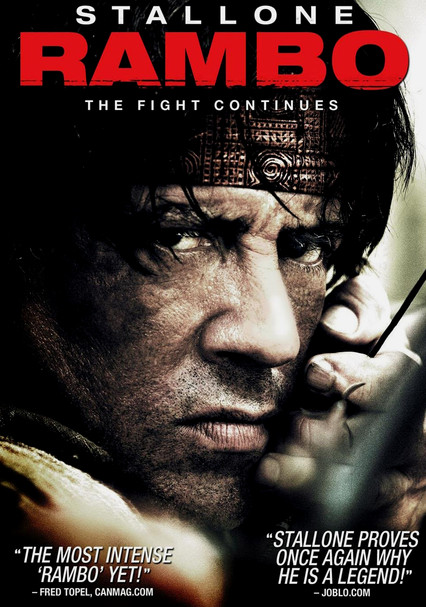 Parents need to know that the fourth installment in the Rambo franchise is, like its '80s predecessors, full of blood and violence (rendered even more disturbing by the last two decades' technological advances). The main character is a one-man killing machine; when pushed to defend himself or others, he'll use anything -- from his bare hands to a rock to a weapon -- to destroy his enemies. Despite being 61, Stallone still has a considerable following, although most of his biggest fans are men old enough to be fathers at this point. While younger kids may not be interested, teen boys may well want to see what all the fuss is about this iconic character. In addition to the disturbing amount of violence, there's also a great deal of strong language and an awful scene that's clearly the prelude to a gang rape.

Young women are forced to dance in front of their brutal captors. They're then hit, and their clothes are ripped off (breasts are visible) as they're about to be raped. Sarah touches Rambo's hand and embraces Michael. A boy is shown escorted to the general's quarters, where the general caresses his head and face before shutting the door.

From the opening news reel of atrocities being committed in Burma, the film is -- save for a few early sequences -- nonstop violence. People are shot, burned alive, blown up, stabbed, hacked, hanged, and raped. Women are shown taunted and then about to be raped. Children are killed. Limbs fly around as bombs and land mines are triggered. Heads explode or are decapitated and bodies dismembered. Name a weapon, and it's used -- arrows, knives, handguns, automatic weapons, etc.

As with most military action flicks, the language is ever-present -- "f--k" is the most uttered word, with "s--t" and "a--hole" close seconds.

Christian aid workers show bravery by continuing their mission in the face of danger. Rambo, as always, decides to take matters in his own hands to help the mercenaries assigned to rescue the missionaries. Lots of male bravado, but the woman character does show she's committed to her cause.

The Burmese soldiers drink heavily during the pre-rape dance scene.