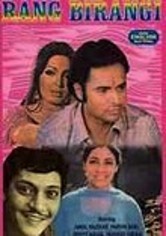 1983 NR 2h 10m DVD
The life of Ajay Sharma (Amol Palekar) becomes complicated when his brother-in-law (Deven Verma) tries to add some spice to Ajay's marriage because his wife (Parveen Babi) thinks he's no longer attracted to her. Instead, the well-intentioned meddling leads Ajay into an affair with his secretary, Anita (Deepti Naval), and causes Ajay's spouse to have a fling with Anita's beau (Farooq Shaikh) in this effervescent comedy.