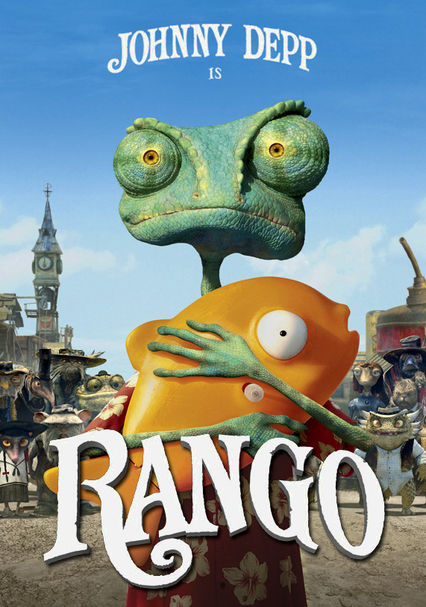 Parents need to know that this animated film starring Johnny Depp is as dramatic as it is comedic, and it deals with several mature themes that may go over kids' head. The main character experiences an identity crisis and ponders life's big questions -- like "who am I?," "where do I belong?," and "why am I here?" (to name just a few of Rango's existential issues). There's also stronger language (both "damn" and "hell" are said several times, as well as insults like "trollop," "tart," and "floozy") and notably more violence than in many animated kids' movies -- violent/scary scenes range from gun showdowns and a gallows outfitted with nooses to a frightening killer hawk and a sadistic snake that threatens beloved characters. A few characters are killed (or nearly killed), shot at, or crushed, and there's a fair bit of smoking by supporting characters. But there are also positive messages about living up to your potential, defending those who are defenseless, and the importance of authority figures who do what's in their community's best interest instead of their own.

Mild flirting -- first with a headless Barbie and then with Beans, whom Rango obviously falls in love with throughout the movie.

Notably more violence than in many animated kids' movies, including a near triple hanging (three nooses hang on gallows) and many genre-specific kinds of violence: gun duels, shoot-outs, and more. In fact, characters all have guns, and most of the violence is at gunpoint, except for the very freaky looking rattlesnake, who threatens to squeeze characters to death (his rattle is a gun!). One character walks around with an arrow stuck in his eye (creepy image); another is suicidal. Characters are killed and shot at. A predatory hawk swoops down and picks up prey to swallow; she terrorizes the inhabitants of Dirt and is killed after a spectacular chase. Characters cross traffic dangerously.

More language than many other animated kids' movies, including "damn," "hell," son of a ...," "tart," "floozy," "trollop," "loser," "I want to see you die," "pathetic," and the Spanish words "cojones" and "huevos" (both of which are included in Mariachi-style songs and are euphemisms for "balls").

The movie's messages are mostly philosophical, with the classic "good vs. evil" battle (common to Westerns) as one of the overwhelming themes. Rango's character development encourages viewers to think about who they are and what kind of individuals they want to be; the movie also makes you think about what it takes to become a hero and how lawmakers and politicians bear responsibility to protect their constituents.

There's a headless Barbie, but the name Barbie is never mentioned; also references to Clint Eastwood and his most famous Western character (The Man With No Name), as well as Pop Tarts.

Many instances of smoking by supporting characters. Also, much of the movie takes place in a saloon, where the animals drink "cactus juice," which is treated like alcohol.