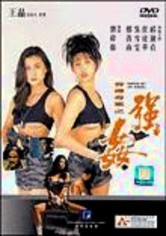 1993 NR 1h 35m DVD
Psychopathic lawyer Chuck Chi-shing (Mark Cheng) brutally rapes his neighbor Chu Kit-Man (Jacqueline Ng). But Chuck proves to be a cunning madman when he's acquitted of the crime and kills his victim, furious that she had the audacity to seek justice. Now, Chu's roommate (Chingamy Yau) is determined to see her friend's death avenged -- and Chuck brought to justice. Wai Keung Lau directs this stylish sequel to Naked Killer.