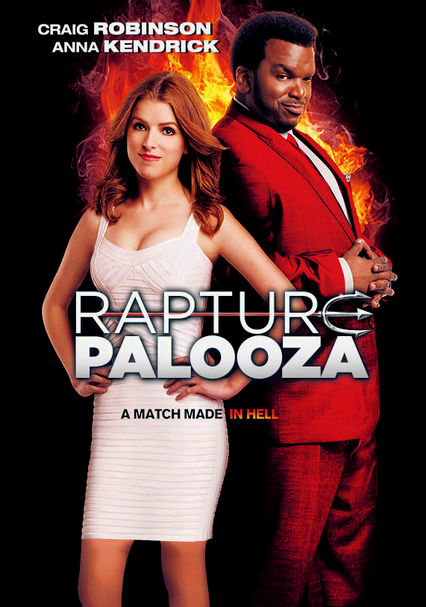 2013 R 1h 24m Blu-ray / DVD
In this revelatory comedy, a pair of teenagers survives the apocalypse only to find themselves on an all-or-nothing mission to defeat the Antichrist -- who turns out to have numerous psychiatric issues and a powerful yen for an Earth virgin.

Parents need to know that Rapture-Palooza is an edgy comedy that depicts what life would be like if the evangelical Christian idea of the rapture took place. Viewers of faith may be offended by the movie's religious jokes and the manner in which Satan, God, and Jesus are portrayed (and ultimately killed, leaving nonbelievers to live in peace). The Anti-Christ (played by The Office's Craig Robinson) makes nearly nonstop overt sexual references, especially once he discovers that another character is a young virgin. The sexual comments are extremely raunchy and explicitly allude to positions, genitals, pubic hair, oral sex, and a host of other graphic descriptions. The violence is intended humorously and includes burning rocks, nuclear weapons, and a zombie virus destroying or turning millions of people. The language is incessant (loads of "f--k," "a--hole," "s--t"), and marijuana use is rampant.

It's the apocalypse, so millions die (albeit pretty bloodlessly) -- from burning rocks hailing from the sky, looting, a virus, killer wraiths, and nuclear missiles aimed at Chicago and other places. A precision laser kills even tiny targets, like a crow flying. God is killed (electrocuted) along with Satan. Jesus is also killed in a comical fashion.

The movie isn't out to send any positive messages and may upset those of faith; even though God and Satan exist, they're portrayed as stupid and banal and are ultimately killed.

Dodge Ram, Mercedes, Vin Diesel, Chronicles of Riddick, and Jimmy Neutron are all mentioned or shown.

People and undead wraiths smoke lots of marijuana, and people drink, including a televangelist who wasn't raptured who turns to vodka.