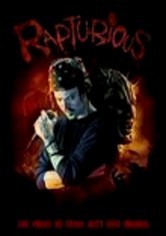 2007 NR 1h 36m DVD
A talented white rapper from Long Island, Rapturious (Robert Oppel) has managed to survive a terrible childhood, but his life hits the skids when he starts taking a new drug supplied by his dealer (Hoya Guerra). Cursed by demonic and homicidal visions, he soon discovers his "hallucinations" may be caused by something more sinister than pills. Directed by former Jerky Boy Kamal Ahmed, this spine chiller co-stars Debbie Rochon and Cinqué Lee.