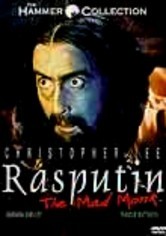 1966 NR 1h 31m DVD
The famed Hammer Studios in England took a break from vampire and mummy movies to lens this gripping story of Rasputin (played by Christopher Lee). Rasputin was the high-living legendary peasant monk -- said to be imbued with healing powers -- who mesmerized and manipulated his way into the affections of the Russian royal family (particularly Czarina Alexandra) during World War I.