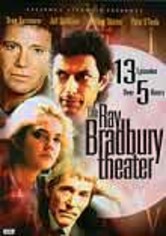 1985 NR 2 discs
Writer Ray Bradbury was born in 1920 and found early inspiration from comic book characters such as Flash Gordon and Buck Rogers, eventually parlaying his interests into a career as a successful science fiction writer. He published his first book, Dark Carnival, in 1947, and many of his short stories were adapted for both the small and large screen. This collection includes several episodes from the TV series "Ray Bradbury Theater."