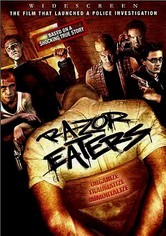 2003 NR 1h 38m DVD
Skinhead Zack and his merrily demented band of Razor Eaters terrorize Melbourne's villains -- and innocent bystanders -- videotaping their own grisly exploits along the way. Paul Moder plays the veteran detective assigned to the case. At the 2003 Melbourne Underground Film Festival, director Shannon Young took home the Best Use of the Guerilla Aesthetic award for his gritty documentary-style thriller, based on a true story.