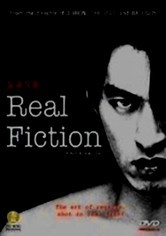 2000 NR 1h 25m DVD
Bad boy of Korean cinema Ki-duk Kim helms this experimental thriller shot in real time. Tormented by thugs and other wrongdoers, a mentally unhinged young artist resolves to exact revenge. Followed by a mysterious woman with a camcorder, he unleashes his fury in a bloody killing spree, which is caught in vivid detail by the handheld camera. Explosive, raw and disturbing, this daring piece marks another noteworthy entry in Kim's film oeuvre.