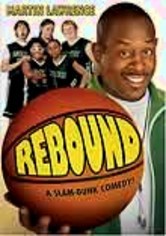 2005 PG 1h 27m DVD
After a heated incident during a crucial basketball game causes him to lose his job, successful but hotheaded college coach Roy McCormick (Martin Lawrence) is forced into a position he never dreamed he'd take: a job coaching a junior high school team. But the kids he inherits are a ragtag bunch of perennial losers, and his flimsy patience will be tested. Megan Mullally,, Breckin Meyer, Horatio Sanz and Patrick Warburton co-star.

Parents need to know that the film includes some mild language and the sort of physical comedy that shows up in kids' sports movies, such as head-whomps with the ball, punches and falls, and near-the-crotch hits. Coach provides a terrible role model for most of the film, concerned as he is with money and stardom; he soon catches on that the game and teamwork are most important. The film also includes brief shots of a smashed-dead eagle (obviously fake, but yucky), beer labels on TV, a child throwing up, coach's bloody nose, and a ridiculous bit where a preacher prays for the team's success.

Coach is selfish and learns to be a nicer person.