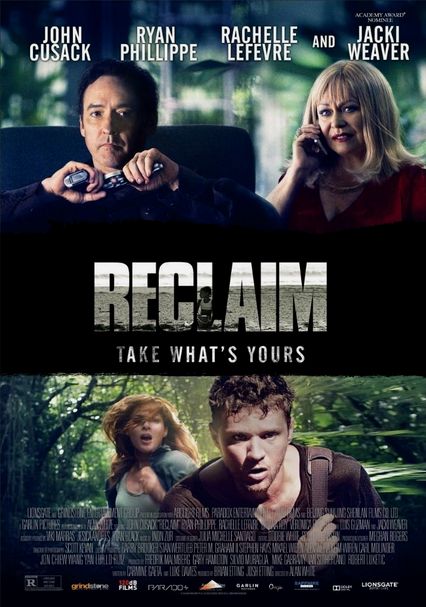 2014 R 1h 36m Blu-ray / DVD
While visiting Puerto Rico to complete the process of adopting a 7-year-old Haitian refugee, a young American couple becomes entangled in a bewildering web of duplicity when the child is kidnapped.

Parents need to know that Reclaim is a thriller centered on the issue of child trafficking. In the story, an American couple is swindled out of their money with the promise of being able to adopt a Haitian child. The movie begins with horrific images of the 2010 Haiti earthquake, including dead bodies, bloody wounds, children in anguish, and general carnage. In the movie itself, characters have guns, and some are shot and killed. There's a brief fight scene and lots of chasing in cars and on foot, with crashes. Characters are also tied up and kidnapped. Language includes several uses of "f--k" and a few uses of "s--t." A main character is a recovering drinker (his drinking led to a tragic car accident in the past), though he doesn't drink at all in the movie's present. A married couple is shown kissing from time to time, and there's some background drinking and smoking.

A married couple kisses from time to time and are generally affectionate toward each other.

The movie begins with some harrowing images of the 2010 Haiti earthquake, including dead bodies, bloody wounds, and children in anguish. In the movie itself, characters threaten each other with guns, and some characters are shot and killed. A character gets sucker punched and knocked to the floor. There's also a sudden car crash and several car chase scenes with crashes. Characters are kidnapped, tied up, and held hostage. There's a chase scene on foot, through city streets, with passersby being shoved out of the way.

In a flashback, the main character is shown very drunk, with his drunkenness contributing to a tragic car accident. In the present day, he's given up drinking, and though he's tempted by others, he doesn't partake. Secondary characters are shown drinking socially, and one of the supporting characters smokes a pipe and cigars.