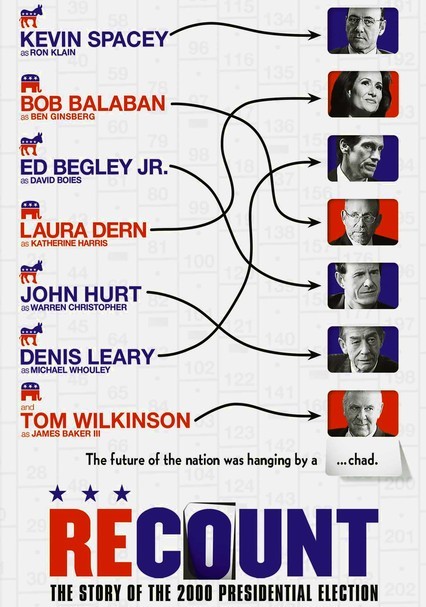 2008 NR 1h 56m DVD
This Emmy-winning made-for-TV movie chronicles the extraordinary behind-the-scenes drama that unfolded in the weeks following the highly controversial 2000 election -- a presidential race that further split an already divided America. With the nation's leadership in the balance, the battle between George W. Bush and Al Gore comes down to a hotly contested vote count in Florida. Kevin Spacey and Laura Dern (in a Golden Globe-winning role) star.

Parents need to know that there is abundant profanity and a vulgar dialog reference to the sex scandal involving former President Bill Clinton. The cast of characters is split between Democrats and Republicans, with the script suggesting (but not as shrilly as documentaries like Fahrenheit 9/11 did) that the Republicans used thug tactics, smears, and cronyism to unfairly win the 2000 presidency (although some of the dialog refers to Democrats behaving just as unethically to "steal" past elections). There is also some social drinking.

While some characters, such as Warren Christopher and James Baker, seem more gentlemanly (and less profane) than others, each character, Democrat or Republican, seems to believe he or she is doing the proper thing, fighting in court to get the "rightful" president in office. Ron Klaim, who initially feels resentful against the Al Gore team for ousting him, regains his sense of party loyalty. The overtly religious (and Republican) Katherine Harris, who thinks her part in all this is the work of God, may look a little ridiculous, and there is a sense that the Republicans here stooped to dirty tricks (like organizing violent mobs of demonstrators) more so than the Democrats, even though their dialog refers to episodes in history when the Democratic Party got away with "stealing" elections.

Mainly the names of major news channels and media agencies.