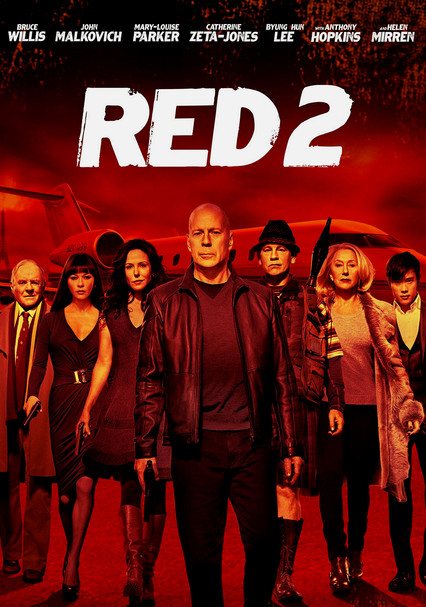 2013 PG-13 1h 56m Blu-ray / DVD
Ex-CIA agent Frank Moses and his crew return for another high-stakes mission, scouring the globe for a missing nuclear device. Along the way, they'll face off against assassins, terrorists and corrupt government officials.

Parents need to know that action/comedy Red 2 is the (disappointing) sequel to 2010's successful Red, and many of the characters (played by Bruce Willis, John Malkovich, Helen Mirren, Mary-Louise Parker and others) return. Violence is again the main issue, with crazy, explosive, cartoonish action/fighting/shooting scenes throughout. Characters are stabbed, shot, and killed; there are bloody martial arts fights and lots of crashes and explosions. The good guys face no repercussions for any of the violent acts they're involved in. Language is fairly minor, with a few uses of "s--t" and "bitch." Expect some brief sexual references and situations; hard drugs (LSD and acid) are also mentioned, and characters drink vodka in one scene. Commercialism is fairly strong, with several brands featured onscreen.

Couples kiss. Characters also (comically) kiss other people as a means of deception or to get information. In one scene, a character is strip-searched. He's seen shirtless and from the back, with the top of his buttocks just showing. In one scene, a man admires a lady's foot and then sniffs her shoe. The cover of a Penthouse Magazine is briefly shown, in a wide shot, with no nudity. Some sexual innuendo.

The movie's violence is largely bloodless, except for one or two violent martial arts-style fist fights, which leave characters with various bleeding cuts on their faces. Many, many characters are shot and killed, and some are stabbed to death. There are car chases and explosions, and a nuclear bomb goes off that apparently harms no one except its intended target. A character casually disposes of a body using acid and a bathtub.

The movie's general message (aside from revisiting the first movie's notion that older folks are still useful/relevant) seems to be that going on adventures and killing lots of people is just what's needed to spice up a romantic relationship. One character kills for the first time and, though she appears shaken for a moment or two, faces no other consequences.

The movie opens in a Costco, with the Kirkland brand visible in several shots. A can of Pringles comes in handy during a fight. A Papa Johns pizza restaurant provides access to a secret tunnel, and the characters have pizza while they dig. In a secret hideout, a character eats an old Moon Pie, and a can of SPAM is visible.

Verbal references to LSD and acid, and characters drink shots of vodka in one scene.