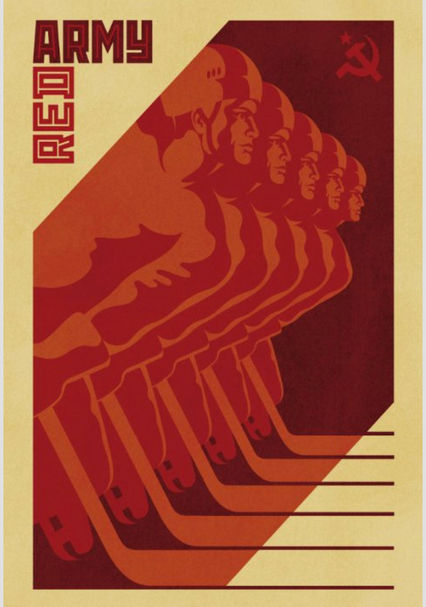 2014 PG 1h 25m Blu-ray / DVD
Captain of the Red Army hockey team during its glory years in the 1970s and '80s, "Slava" Fetisov recalls the pride and constant pressure felt by the players on the squad during a turbulent political era in the Soviet Union.

Parents need to know that Red Army is a documentary directed by Russian-American Gabe Polsky about the Soviet Union's legendary national ice hockey team from the '70s and '80s. It has extensive interviews (in English and subtitled Russian) with the most famous members of the Soviet team, particularly the legendary Russian Five, including Slava Fetisov, Alexei Kasatonov, Vladimir Krutov, and hall-of-famer goalkeeper Vladislav Tretiak. The interviewees' language infrequently includes variations on the word "s--t" (shown in subtitles), and some of the hockey footage shows violent confrontations and plays -- even blood on the ice. But otherwise this is a fascinating documentary for any hockey, sports, or history fan.

Hockey is an aggressive, violent sport, and there are scenes on the ice with blood and discussions of an accident that killed a player's brother.

Despite nations' ideological differences, the love of sport and country are in the forefront. The Russians seem happy to have played in the NHL and made a lot of money and had more personal freedom, but they also lament how even Russian players are now all about the money rather than the love of the game. The documentary makes viewers question whether there's a happy medium between the forced regime of the Soviet system and the highest-bidder system of today's sports teams.