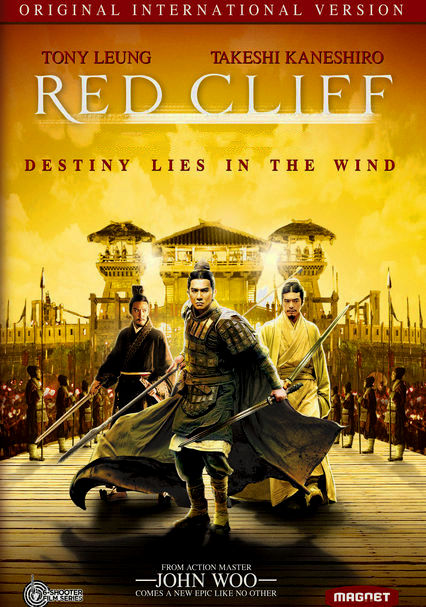 2008 NR 2h 26m Blu-ray / DVD
When a warmongering prime minister (Fengyi Zhang) advances his armies against two rival kingdoms, he unwittingly prompts his adversaries (Chen Chang and Yong You) to work together in this martial arts action-adventure. The ensuing conflict culminates in the epic battle of Red Cliff, a struggle by the sea involving more than one million soldiers.

Parents need to know that director John Woo's rousing battle epic based on Chinese history definitely has plenty of violence (spraying blood, martial arts, etc.) and other war-related themes, as well as one notable sex scene. But there are also strong messages about war being a last resort, and the story has an optimistic driving force in the form of a growing friendship between two men who serve different armies but team up to fight a greater threat. There are also two strong female characters, each of whom risks her life for the greater good. Red Cliff is similar to films like Braveheart and Gladiator, but with a more poetic, gracious spirit. Older, less sensitive teens are likely to be enthralled, as will parents. The two-part, uncut, international version is now available on home video; besides the 288-minute length, the uncut version has richer, more developed characters and more nuanced battle strategies, but a similar level of violence.

One sex scene between married adults. No nudity is shown, and the scene is very soft/gentle, but it's very clearly sex. There's also some very tame flirting between two soldiers (one is a girl disguised as a boy).

Some heavy battle violence, with spraying blood and falling horses. Characters are stabbed with lances, and a character loses a hand. The villain sends several rafts piled with typhoid-infected corpses, inflicting the heroic soldiers who try to bury the bodies. There's also plenty of martial arts-related violence, and a scene in which a tremendous fire spreads across a fleet of ships, causing untold damage and death.

Though this is a war movie with plenty of violence, it's obvious that it ultimately doesn't support war. The heroes enter into battle reluctantly and only when it's clear that there are no other options. It's also clear that the villain is in the wrong and that his victory would spell disaster. The heroes win by using their heads and hearts, rather than brute force or mindless attacks. It's a definite David-and-Goliath story, with the heroes standing up against impossible odds and finding clever, cunning ways to enter the fray.

In one scene, characters pour liquor on the ground in homage to their fallen comrades and also take a few sips. A character mixes some drugged tea for a villain to drink.