Red Stuff: The True Story of the Russian Race for Space 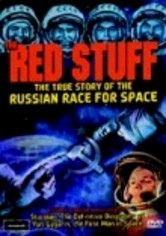 Red Stuff: The True Story of the Russian Race for Space

2003 NR 1h 40m DVD
Featuring information from newly declassified documents, this penetrating film chronicles the epic story of the Cold War-era Soviet space program, which beat America's space program to every goal except putting a man on the moon. From the cosmonaut's stories to the role of Soviet propaganda, the program helps lift the veil on one of the most secretive and high-stakes international rivalries of the 20th century.