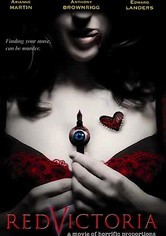 2008 NR 1h 29m DVD
Talented but broke screenwriter Jim (Tony Brownrigg) reluctantly agrees to pen a horror script to raise some cash. But his inspiration comes in a very unusual form: a murderous muse named Victoria (Arianne Martin) who's determined to give Jim a true taste of terror. As the vengeful spirit begins killing his friends one by one, Jim turns to his pal Carl (Edward Landers), a horror movie expert, for help in evicting his deadly visitor.