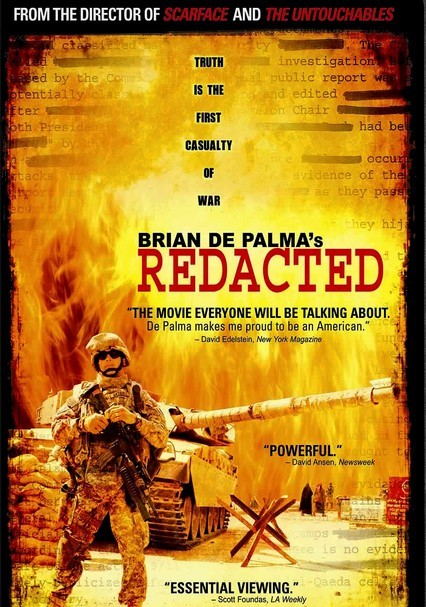 2007 R 1h 30m DVD
Written and directed by Brian De Palma, this docudrama about the war in Iraq uses news broadcast footage, trial coverage and video blogs shot by soldiers and civilians to illustrate the contrast between different forms of media coverage. Homing in on an incident in which a 14-year-old Iraqi girl was raped and killed by U.S. soldiers, De Palma presents a thought-provoking argument that the realities of war are, in fact, victims of perspective.

Parents need to know that this mature Iraq war drama definitely isn't for kids. Based on a true story, it deals with violent acts like rape and murder (including the shooting of a pregnant woman) and shows U.S. soldiers' boredom, fear, and tensions. The closing images of real Iraqi civilian corpses and mourners are especially difficult. Weapons include guns, grenades, and IEDs; other scenes show drinking, the effects of drugs, and cigarette smoking. Not surprisingly given the war-zone setting, language is strong and constant, with more than 100 uses of "f--k" and lots of racist and misogynist slurs.

Ongoing and upsetting violence throughout. A rape is central to the story. Several scenes show shooting and bombs exploding. Images of guns, tanks, and shoulder-mounted grenades. U.S. soldiers man a checkpoint where they shoot up a car that's transporting a pregnant woman to the hospital (some blood). Hospital scene shows blood and chaos. A sergeant is killed by a bomb (his bloody, detached leg flies into the frame and lands on the ground). A woman describes the rapists' brutal possible deaths.

U.S. troops are angry, frustrated, and fearful; several are overtly racist and misogynist. A group of four soldiers rapes a 14-year-old Iraqi girl. She and her family are murdered; the primary villains never show remorse.