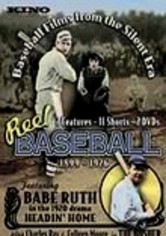 1899 NR 2 discs
Enjoy some of the earliest portrayals of baseball in films through this winning collection of 11 shorts and two feature films. Highlights include Headin' Home, Babe Ruth's film debut in which he stars as himself, and The Busher, the story of a minor league pitcher making it to the big leagues. In addition to a rare look at early baseball, the short films also include laughs from cartoon favorite Felix the Cat and comic John Bunny.