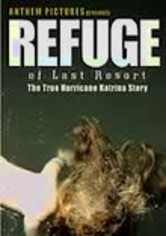 2006 NR 1h 12m DVD
With Hurricane Katrina bearing down on New Orleans, local filmmaker James L. Bills and his family decided to ride out the storm in a downtown hotel. Six days later, they still hadn't made it home. This film tells their story, in the process documenting the plight of Big Easy residents before, during and after Katrina. Shot in high-definition video, it includes footage from the Superdome and convention center as well as interviews with survivors.