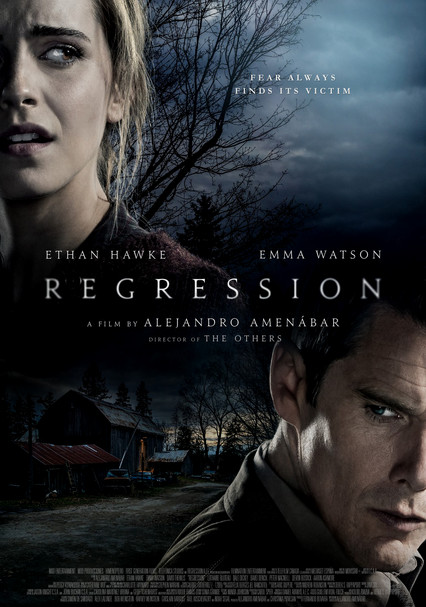 2016 R 1h 50m Blu-ray / DVD
In this disquieting thriller, a Minnesota police detective is sent to investigate a sexual assault case involving a teenage girl who's accused her father of rape. While willing to accept responsibility for his actions, he has no memory of the crime.

Parents need to know that Regression is a thriller with horror elements. It deals with the possibility of satanic cults and includes imagined/dreamed rituals, including slicing up babies and eating them (this is strongly implied but not actually shown). There's some blood and discussion of a father abusing his teen daughter; other violent/upsetting moments include a suicide, fighting, punching, and guns being drawn (but not fired). A woman has sex with a man, presumably during a dream; she straddles him, and her buttocks are shown as she grinds on him. There's another very brief image of a couple having sex in a car. Language is infrequent but includes "f--k," "bitch," and "s--t." The movie tries to make a point about the danger of succumbing to mass hysteria, but it doesn't really work. Not many teens will care, despite the fact that Harry Potter's Emma Watson stars.

Images of sex during a dream sequence. A woman's buttocks are seen as she straddles a man and grinds on him. Brief glimpse of a couple having sex in a car. Lead characters kiss.

Discussion about a father abusing his teen daughter. Nightmarish images of torture, satanic rituals, implication of chopping up a baby (not shown). Blood shown, satanic worshippers eat gory flesh. Intruders in house. Fighting, punching. Hypodermic needle jabbed into an arm. Suicide (jumping out of a window); talk of suicide. Scary sounds. Screaming/shrieking. Guns pulled but not fired. Brief scene of teen girl being tied to bed. Violent arrest of a man. Prisoner screams, freaks out.

Tries to make a point about how people, if they're not careful, can be swept away by panic and false beliefs. Unfortunately, this message is saved as a "surprise" for the end of the movie and doesn't leave much room for pondering.

Mention of an unseen character being a drunk.