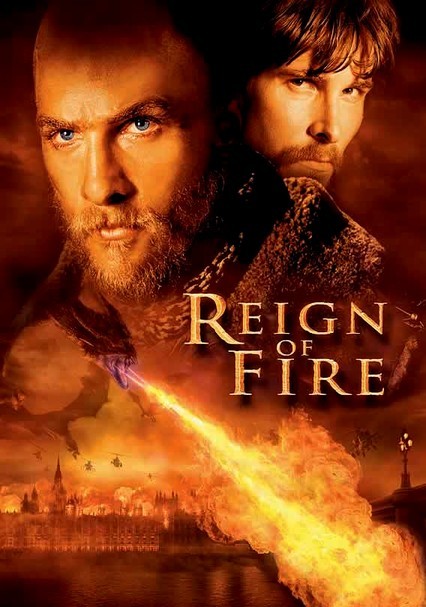 2002 PG-13 1h 42m Blu-ray / DVD
In post-apocalyptic England, a tough-talking American wanderer and a wary British survivor team up to fight off a horde of fire-breathing dragons that are rapidly returning to global dominance after centuries of slumber underground.

Parents need to know that violence in this monster flick includes the mother of a little boy being killed, non-graphically, by fire-breathing dragons. Deaths are not very bloody -- usually characters enveloped in CGI flames, eaten in one gulp by dragons, or falling. There is occasional swearing, smoking, and drinking.

Birds-and-bees talk about how dragons breed (about as explicit and realistic as claiming the stork is involved).

Non-explicit scenes of people killed by being engulfed in flames, falling from great heights, or snatched up in dragon jaws. One human-against-human fistfight. Dragons also shot at and killed.

Quinn overcomes his personal terrors (a childhood trauma in which he saw his mum killed) to return to the dragon's lair in London and triumph. Sub-theme about how a modern society might resemble a medieval one if some disaster causes civilization's collapse.

Names of major news magazines. A Reign of Fire video game exists. The plotline cleverly insinuates references to The Lion King and Star Wars, as today's movie blockbusters turn into the fairy tales of a movie-less future world.

Cigarette and cigar smoking, macho and celebratory drinking of liquor.