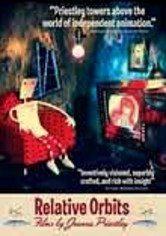 2005 NR 1h 20m DVD
Joanna Priestly's one-of-a-kind animated films are full of compelling themes that deal with gender, love, aging, human rights and even candy. With styles ranging from hand-sketched figures to digitally drawn landscapes, these shorts are knit together by several constants: Priestly's innate warmth, optimism and comic storytelling. The 10 films included prove that the inventive artist ranks as the queen of independent animation.