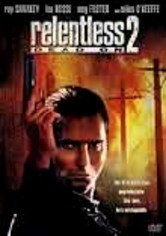 1992 R 1h 34m DVD
In this sequel to Relentless, Los Angeles detective Sam Dietz (Leo Rossi) hunts for the Occult Killer, whose victims are reported dead &NFibefore&NFi_; they're murdered. Assisting him is FBI agent Kyle Valsone (Ray Sharkey), whom Dietz doesn't fully trust. After Dietz sets out to catch the killer his own way, he finds that he's become a pawn in a deadly political conspiracy. Meg Foster, Miles O'Keefe and Ray Sharkey co-star.