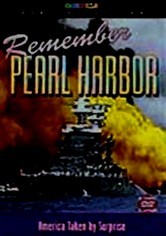 2001 NR 2 discs
Few people remember the Pearl Harbor that existed before the surprise Japanese air strike in 1941. With rare film and sound recordings, including exclusive color footage shot at Pearl Harbor only months before the surprise attack, the military base is remembered as it was. Also included are the comments of several leading naval historians who highlight little-known details about our nation's greatest naval disaster.