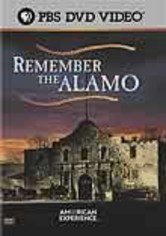 2004 NR 1h 0m DVD
Memorialized in numerous movies, the Battle of the Alamo is once again brought to life in this PBS documentary that hews to the facts: Conflict seemed inevitable in the Mexican-ruled Texas of the 1830s, when Tejanos tried to live side by side with both Mexicans and Americans. As many Texas residents decided to seek their independence, everyone was forced to pick sides -- a painful choice captured in this detailed account.