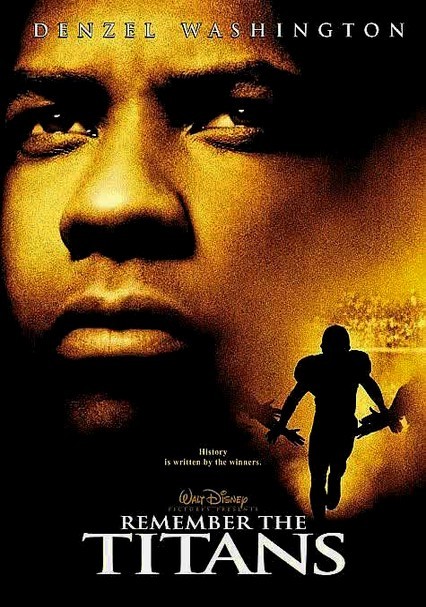 2000 PG 1h 56m Blu-ray / DVD
The year is 1971, and the people of Alexandria, Va., are none too pleased when African American Herman Boone is given the nod to head a newly integrated football team. As the season progresses, however, their contentious attitudes begin to change.

Parents need to know that Remember the Titans tells the inspirational true story about the struggles and victories of a newly-integrated high school football team in 1971 Alexandria, Virginia. As such, the film reflects the divisive nature of the times -- the film begins with a near-riot scene between African-Americans and whites on the street separated by the police as bottles and windows break. The racial tensions of the town -- segregation in restaurants, racial slurs, fist fights in the high school -- are shown to highlight the backdrop in which the Titans must learn to get along and play together as a team. The movie includes racist comments and situations and some locker room insults. A major character is critically injured in a car accident. When the boys refer to a long-haired teammate as a "fruitcake," he responds by kissing one of them on the mouth. There are some scuffles and threats of more serious violence. Ultimately, Remember the Titans is a deeply moving film about the courage of individuals and the power of sports to transcend perceived and ingrained differences.

Boy taunts another boy by calling him a "fruitcake"; boy responds by kissing him.

Early in the film, a street scene on the verge of a riot is shown. Bottles are thrown and broken, windows are shattered. As the Titans try to integrate, a white player and a black player get into a fistfight in their training camp dorm room. In their high school, a brief exchange of punches is quickly broken up as white students attempt to beat up a black student because they believe he's flirting with one of the white student's girlfriends. During the football games and practices, there are lots of montages with tackles. A car accident is shown -- a character doesn't pay attention, runs a stop sign, and is struck on the driver's side by a truck.

It isn't easy, but when people learn to set aside their fear and prejudice and work together, they can accomplish truly great things, not just in sports, but in life.