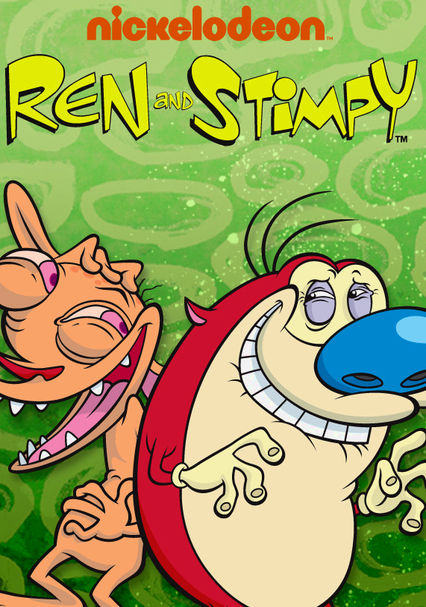 1991 TV-Y7 2 seasons
Joined at the hip despite their stark differences, scrawny, short-tempered Chihuahua Ren and happy-go-lucky but dumb-as-dirt cat Stimpy struggle to make their way in the world, always landing in bizarre adventures full of hilariously gross hijinks. A huge hit with kids and adults alike, this Nickelodeon cartoon series finds the oddball duo frequently besieged by all sorts of disgusting substances from mighty farts to sickening saliva.

Rabid, insane Chihuahua Ren and his brainless sidekick, Stimpy the cat, return for another round of outlandish and unbridled adventures. Along for the wild and woolly ride are the deranged twosome's buddies Powdered Toast Man, daffy Wilbur Cobb, Jimminy Lummox, Jerry the Bellybutton Elf and some demented circus dwarfs, among others. Contains 29 great installments of the animated cult classic.

Happy, happy, joy, joy is in store for viewers with this collection of episodes from the hilariously offbeat animated series. The gang's all here -- including Jimmy Lummox, Jerry the Bellybutton Elf, Powdered Toastman and Wilbur Cobb -- as the off-the-wall dog-and-cat duo scales new comedic heights on side trips to such disparate destinations as the dinosaur era and the Capitol, grappling with issues ranging from puberty to television dependency.

Parents need to know that there have been several incarnations of this show, including some "lost episodes" that were aired in 2003 under the title Ren & Stimpy: Adult Party Cartoon. Although the original series (which still airs in syndication and is available on DVD) is tamer than that version and was definitely marketed toward grade-schoolers and tweens, between the frequent implications that the main characters are gay and their constant abuse of each other, it's really a much better fit for older tweens and teens. What's more, the show -- which first aired in 1991 -- was ground-breaking in its willingness to disregard social conventions by depicting bodily functions and adding a significant amount of gore to its cartoon violence. The episodes that air on Nicktoons usually offer a somewhat watered-down version, but they still aren't meant for kids.

There's often heavy sexual content for a cartoon that, in theory anyway, is meant for kids. There's also a suggestion of a homosexual relationship between the title characters (particularly in the episodes on DVD).

Heavy cartoon violence, with more malice than you'll find in most 'toons. When Ren slaps Stimpy (as he does often), the sense of fun found even when Tom is trying to eat Jerry is absent.

There's some South Park-esque lampooning of commercialism and narrow-mindedness, but for the most part, the characters just come across as mean. Lots of humor involving bodily functions (which are presented pretty graphically, for a cartoon).

Some episodes include humor based on the affects of drugs and alcohol.