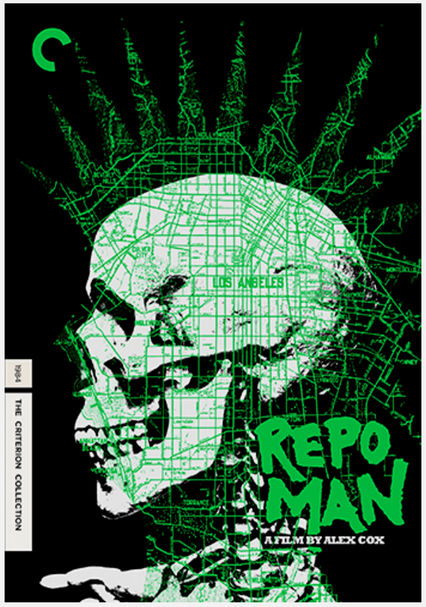 1984 R 1h 33m DVD
Delinquent Otto finds a higher calling when he hooks up with a band of contemporary "knights": the repo men. When a big reward is offered for an elusive 1964 Malibu, Otto dodges cops, religious kooks and more in a frenzied quest for the car.

Parents need to know that this cult satire is not to be confused with the later sci-fi action flick Repo Men, starring Jude Law. Here there is a nihilistic view of the world, with hardly any person or institution worth respecting. Young "hero" Otto is not much of a good guy -- he's into booze, drugs, and sex (though he mostly gets rejected in this last case) and only acts in his own self-interest. Violence includes bloody, fatal shootings, and a few characters vaporized by a kind of death ray. Swearing is at R-level. The government is untrustworthy and not above torturing citizens. Love and organized religion are made to look pretty stupid, too. Bad-behavior stuff includes horseplay with guns and drug/alcohol use. There's nasty, outlandish sex gossip about John Wayne.

The ET force in the car trunk vaporizes people, leaving just the boots standing. People die in a bloody holdup and a gunfight. Otto and other characters get beaten up, usually by gangs. Kung-fu style combat. Hot coffee thrown in one character's face. Otto is tortured with electric shocks by government agents. A corpse is set on fire.

The f-word repeatedly, the s-word,"a-hole," "dickhead," "douchebags." An obscene gesture and some racial slurs.

Otto is initially in awe of the repo man lifestyle. But in the end the callow kid isn't impressed by it or much anything else in daily LA life.

Names of car models are prominent, of course. One minor character sings a 7-Up jingle, and liquor signs light up the night.

Otto and Buddy share cocaine. The repo men are stated to be on "speed" to keep their long hours. Beer drinking (possibly underage) and drunkenness. One character accused of "doing acid." Cigarette smoking.