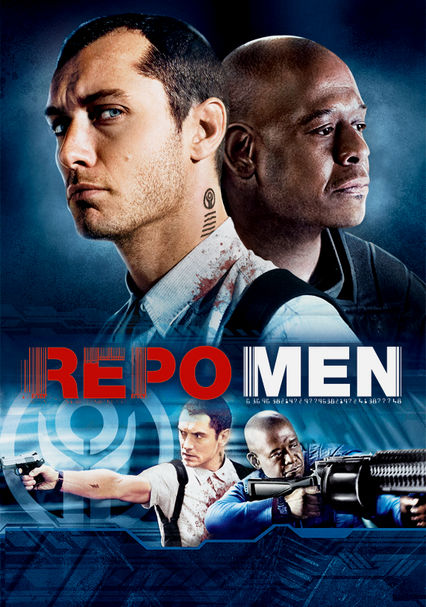 2010 UR 2h 0m Blu-ray / DVD
In a not-too-distant future where artificial organs are readily available to anybody with a credit card, an organ repo man finds himself fleeing his ex-partner after failing to keep up the payments on his own recently installed ticker.

Parents need to know that Repo Men is a violent, gory sci-fi action film set in a dystopian future, and not to be confused with the movies Repo Man (1984) or Repo! The Genetic Opera (2008). The hero is a "repo man" whose job is to violently re-claim his company's property (artificial organs), which includes maiming and sometimes murdering people. One particularly gory scene includes characters cutting open their own bodies to read a bar code on their artificial organs. Language runs the gamut of "Goddamn" to "f--k," and there is some sexy stuff, including one very brief scene in a sex club that includes female nudity and a couple having sex. Overall, it's too violent and downbeat for anyone but older, responsible teens.

A woman starts to perform oral sex on a man but is interrupted. There is a quick sequence of events in a sex club, taking up less than one minute of screen time, but filled with female nudity, and a man having sex with a woman from behind. The hero and the girl kiss quite often and appear in bed together, though they are never seen totally naked, or having sex.

There is a great deal of slicing and dicing of flesh, complete with gory open wounds, and spraying, spattering blood. We also see many fights, using fists, knives and other blunt objects, as well as old-fashioned guns (with bullets), futuristic laser guns, and Taser-like "shock" guns. In one very intense scene, the heroes slice open their own bodies so that they can insert a scanner to read the bar codes on their artificial organs.

The movie clearly has something to say about current topics like health care, insurance companies, and corporate corruption. The movie's hero decides to stand up to his corrupt company, but his path includes gratuitous murder and extreme violence. What's more he tries to save only himself and his girlfriend, and not the countless other people who are being hunted by the evil corporation.

There are (at least) two ads for Puma, once on a billboard in a subway station, and then moments later on the side of a sports bag.

The heroes drink beer fairly often during the movie's first half -- or at least it looks like beer since it comes in futuristic-looking bottles. In one shot, a conflicted, confused character is seen drinking, with several empty bottles on the table in front of him.