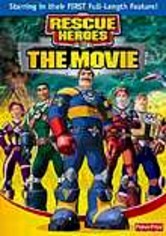 2003 NR 1h 20m DVD
As a series of unexplained lightning storms rage across the planet, the Rescue Heroes must pool their unique individual powers to stop the storms from colliding and destroying Earth. But a series of unfortunate events leaves the team shorthanded. Soon, they're focused as much on saving each other as they are on saving the planet. Based on a short-lived WB animated series, this film features the voice work of Lenore Zann and Rod Wilson.