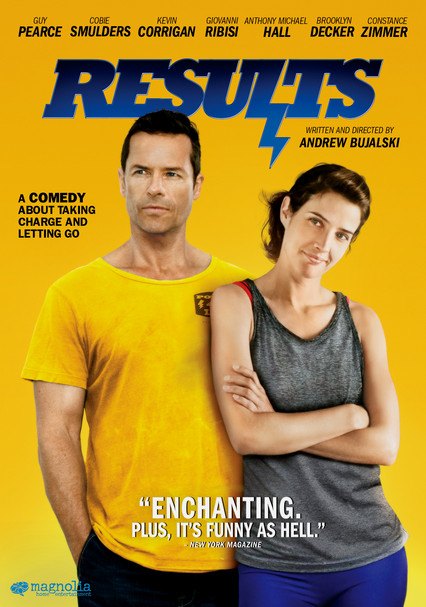 2015 R 1h 44m Blu-ray / DVD
Pursuing personal renewal in the wake of an ugly divorce, the wealthy but unhappy Danny takes himself to the neighborhood gym and soon develops an unusual relationship with the gym's owner, Trevor, and captivating trainer, Kat.

Parents need to know that Results focuses on two personal trainers and the client they share. It's kind of a romance, but mostly it's a drama about personal connections -- what brings people together, and what can drive them apart. Scenes of characters fooling around include amorous noises and expressions, but no graphic nudity. But there is a fair amount of swearing ("f--k," "s--t," and more) and drinking, and some of the main characters like to smoke pot. For those reasons, and also because the characters' relationships are presented in an adult way, with complex conflicts, it's most appropriate for older teens and up.

Brief scenes show people fooling around -- mainly with close-ups of faces moving and some amorous sounds. No graphic nudity. Some sexual references in dialogue.

Bickering between friends and couples.

The main characters are personal trainers who are constantly encouraging their clients to better themselves. Even the most cynical of them believes that people can improve themselves, physically and mentally, if they focus on their goals and work hard.

Several scenes show adults getting drunk and smoking lots of pot. One character often smokes pot by himself.