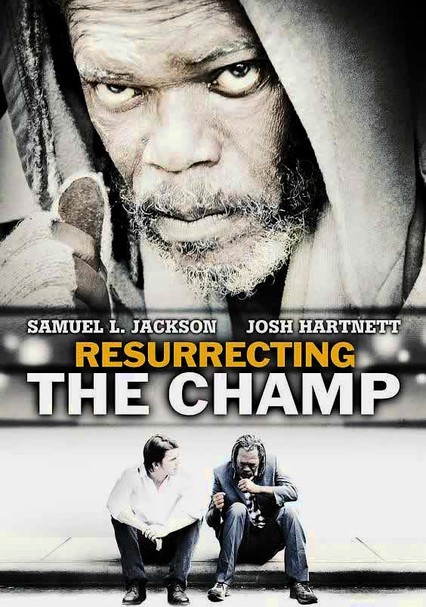 2007 PG-13 1h 52m DVD
Sportswriter Erik Kernan is struggling to boost his career, live up to his father's legacy and be a better father to his own son. Complicating matters is his friendship with a homeless man who claims to be one-time boxing champion Bob Satterfield.

Parents need to know that this sports drama revolves around boxing. Bloody fight scenes take place both in the present and in black-and-white flashbacks and involve violent, noisy, fast-cut footage. The Champ is homeless; he appears dirty, tattered, and repeatedly drunk, and he smokes a lot of cigarettes. The movie focuses on lying and telling stories to enhance your career and history, as well as tense relationships between fathers and sons. A couple of women appear in seductive outfits and poses. Language includes one use of "f--k," plus more colorful "ringside" language.

Girls in bikinis hold up placards between boxing rounds; producer appears in a slinky dress, trying to seduce Erik into a "torrid affair" (he turns her down).

Frequent boxing scenes are filled with hard-hitting, noisy, sometimes slow-motion violence, with blood spurting, flesh splitting, and bodies falling. A group of kids beats up the Champ in an alley, kicking and hitting him for fun (bloody injuries are visible). Erik hits a computer screen in an angry moment.

The movie has a thematic focus on ambition, deceit, and disappointing role models; Erik learns a lesson after he has hurt several people. Some racist comments from the Champ.

The Champ smokes cigarettes repeatedly; he also drinks beer (sometimes from a brown paper bag). Other social drinking in bars.