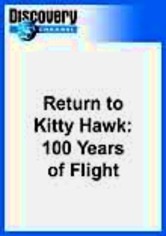 2004 NR 0h 44m DVD
A century after Orville and Wilbur Wright embarked on their history-making flight, pilot Ken Hyde heads a thrilling attempt by aeronautic engineers to replicate the machine that the sibling inventors built to test their theories about flight. The project, supported by the Experimental Aircraft Association and Ford Motor Company, is made all the more challenging by the fact that the brothers left behind little documentation about their process.