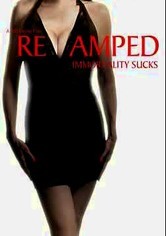 2008 NR 1h 30m DVD
After a sexy encounter with a beautiful woman named Lilith (Tane McClure), successful businessman Richard Clarke (Jeff Rector) soon discovers that the "love bite" he's received has turned him into a vampire. While getting adjusted to his unusual powers, he tries to understand the meaning of his new existence, but hot on Richard's trail is a special force of vampire hunters determined to wipe out all the bloodsuckers they find.