Revenge of the Bushido Blade 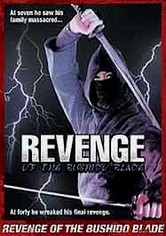 Revenge of the Bushido Blade

1980 R 1h 38m DVD
Decades after murdering a Japanese general and his wife at the height of World War II tensions, members of a U.S. Army platoon return to the Philippines to revisit the scene of the crime in this action-packed drama. But their reunion is cut short when the dead man's son, who witnessed his parents' killings, sets his plan for revenge in motion. Screenwriter Galen Thompson and veteran character actor Philip Baker Hall co-star.