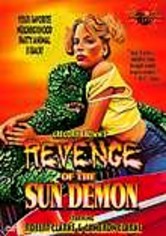 1989 NR 1h 11m DVD
Dig this hilarious re-dub of Robert Clarke's "atomic age" cult classic about rampant paranoia. The flick takes a ludicrous genre film and leaves it intact -- except for the dialogue, which now tells the story of scientist Dr. Gilbert McKenna, who has a strange skin problem and an enormous sex drive. Raunchy and offbeat, the movie features the vocal talents of some of L.A.'s best stand-up comics, including an uncredited Jay Leno.