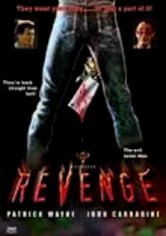 1986 NR 1h 44m DVD
Director Christopher Lewis also penned the script for this sequel to his 1985 horror flick, Blood Cult, a movie that claims to be the first direct-to-video feature film. This time, Patrick Wayne (son of Western icon John Wayne) and horror legend John Carradine (The Howling) co-star in a plot that finds a cult of cold-blooded killers stalking college students for human sacrifice.