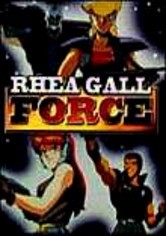 1989 NR 1h 0m DVD
In the year 2085, a discovery on the moon changes the world, giving rival factions advanced robot weapons and plunging the planet into a long and devastating war. This second entry in the Gall Force anime series begins in the aftermath of that war, when the remnants of mankind are forced to unite to face a new threat: a force of alien robots bent on exterminating the human race.