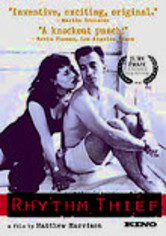 1994 NR 1h 27m DVD
Slacker Simon (Jason Andrews) spends his days selling bootleg tapes on the streets of New York and sleeping with arty chick Cyd (Kimberly Flynn). But he provokes the ire of the members of an all-girl punk band who come after him when they discover he's stealing their music. The acclaimed indie drama, which won the Special Jury Prize at Sundance, stars real-life singer Cynthia Sley of Bush Tetras, along with Kevin Corrigan.