Ribbits!: The Hero of Hopper's Landing 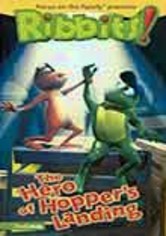 Ribbits!: The Hero of Hopper's Landing

2002 NR DVD
Little Tad is sick and tired of being picked on by Bully Frog and all his mean friends. He really wishes he could win the frog-jumping contest at the annual fair to show them he's not so little. Although Tad trains hard for the contest, he soon realizes that he simply isn't big enough just yet. That sneaky snake Cottonmouth convinces Tad he &NFiis&NFi_; big enough and can become the "hero of Hopper's Landing," but Cottonmouth isn't telling the truth.