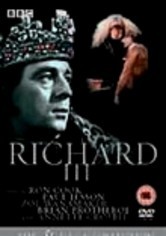 1983 NR 2h 0m DVD
A self-described villain, the pathetic Richard of Gloucester sets his sights on the monarchy, currently led by his brother Edward IV. Richard resorts to subterfuge, deceit and murder to ensure his ascension to the throne. Ron Cook, Brian Protheroe and Michael Byrne star in this staging of one of the most popular Shakespearean histories, part of the BBC's series of the playwright's complete works.